THE KEMPER KABINET AND KEMPER KONE!

A LIGHT WEIGHT, POWERFUL, SPEAKER CABINET AND AN EXCLUSIVE SPEAKER DESIGN FOR THE KEMPER PROFILER™ WITH A CHOICE OF 19 DIFFERENT SPEAKER CHARACTERS (AKA IMPRINTS)

The KEMPER Kabinet™ is especially designed for the PROFILER. The KEMPER Kabinet is a combination of the KEMPER Kone™ loudspeaker and an extensive speaker tone mining technology developed by KEMPER making it possible to digitally „imprint“ various speaker characteristics onto one single cabinet.

The KEMPER Kone is a 12“ full range speaker which is exclusively designed by Celestion for KEMPER. It is controlled and driven by the KEMPER PROFILER’s DSP to an ultra-linear (full range) frequency response, using a dedicated DSP algorithm. In contrast to the conventional idea of a full range system, the radiation pattern of the KEMPER Kone™ has been narrowed towards the physics of a classic guitar speaker chassis, so that even the full range sound carries a distinct guitar speaker character, unlike regular PA speakers or monitor speakers.

Among the imprints, you will find the finest choice of well-known guitar speakers from Celestion and many more, as well as some rare and very particular speakers. More speaker imprints may be added via future software updates.

The KEMPER Kabinet can be driven by the power amp of a PROFILER PowerHead™ or PowerRack™, as well as by utilizing any external solid state power amp. When using external stereo amplifiers, driving two Kabinets in stereo is possible.

CHOOSING YOUR SPEAKER IMPRINT FOR KEMPER KONE AND KEMPER KABINET 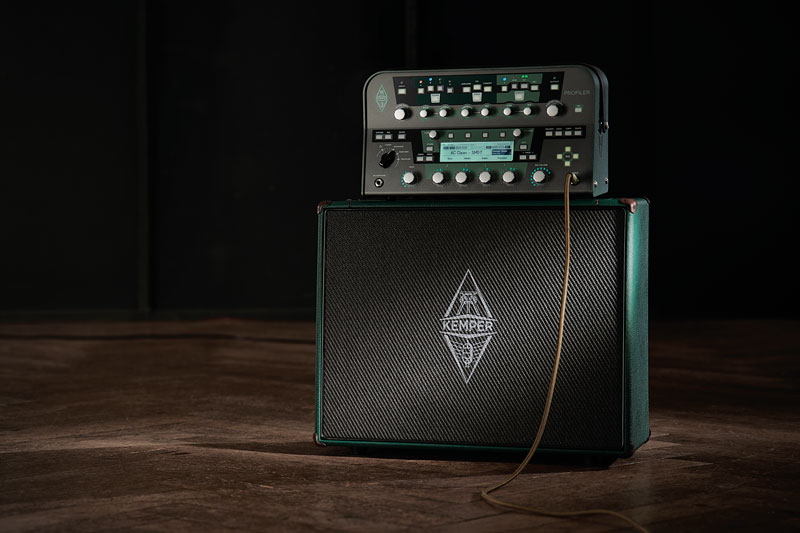 By simply activating the PROFILER™’s well-known Monitor CabOff function the KEMPER Kone is switched from full-range mode to the Speaker Imprint Mode, which then exactly mimics one of 19 classic guitar speakers. The sound of these imprints should not be mistaken with the mic‘ed cabinet simulations of a Profile. They rather bring back the good old “amp-in-the-room” sound.

Since the intelligence of the speaker lies in the DSP of the PROFILER, you will be able to switch individual speaker imprints along with your favorite rigs, without needing to do extensive editing. Whenever you switch to a full-range sound, for an acoustic guitar, for example, the KEMPER Kone will switch to full-range mode automatically.

Music that is fed into the PROFILER through the Aux Input will be played back in full-range mode, even when you play your amp with a Speaker Imprint, both at the same time.

Due to the digital features, the KEMPER Kone and KEMPER Kabinet work exclusively with a PROFILER.

The choice of the right speaker and cabinet makes a great difference to the tone of your selected amplifier, your rig. A lot of particular guitar speakers have been a major part of the classic and genre defining amp tones. A good example for this is the Vox AC 30 paired with the legendary Blue Bulldog speakers. But, it is your choice.
To make it easier for you to choose the right speaker imprint for your tone with the KEMPER Kabinet™ we have put together an overview over the current imprints available for the PROFILER™.

Celestion Blue Bulldog Alnico
Celestion’s Blue Bulldog is known to be the first speaker in the world that was designed for guitarists. In fact, it originated from a modified radio speaker. It was found in numerous British amplifiers in the early days of rock, and created a big impression, becoming most famous when it was included in the Vox AC30. You can hear it when listening to George Harrison, Brian May or, more recently, U2’s The Edge.
The 12″ driver uses an alnico magnet and is known for its unique, three-dimensional, chiming top-end and its sweet midrange — it cuts through the mix without being harsh.
The lower frequencies are full and controlled even though the power handling is just 15 watts. Additionally, the speaker sounds pretty aggressive when driven hard. Its sensitivity is pretty high at 100 dB. However, it is obviously not a modern speaker, but undoubtedly a classic. The proven choice for the AC30.
Celestion G12M “Green Back”

One of the most popular speakers for guitar amplifiers is Celestion’s G12M — the so-called Green Back, which dates back to the mid 1960s. You can’t really differentiate Celestion speakers by the color of their rear panels, but we’ll stick with the popular nickname for this one!

The G12M is a 12” speaker with a ceramic magnet, a rating of 25 watts (20 Watts for older models), a resonance frequency of 75 Hz and a sensitivity of 96-98 dB (depending on the model). It was part of several early 4×12″ cabinets made by Marshall and, until today, its sound character is highly regarded in rock music. It is part of the Plexi sound of the ’60s and ’70s and is a good choice for vintage, classic and hard rock sound — artists such as AC/DC have been using it for their entire career.
The G12M is mid-focused with a warm top-end. This makes it forward and somewhat woody sounding, and sounds great when soloing. It doesn’t sound harsh with clean channels and it works great with overdriven signals. It has a broad low end, but not the tightest. Also, due to its low rating, the speaker introduces additional compression when driven at high levels.

There were several issues of the G12M. Originally, the membranes were made by Pulsonic® — later ones were made by Celestion and others. The product was discontinued in 1978 but re-issued in 1989.
In short: Use a G12M when you want classic crunch sounds that nicely sit in the mix without being harsh. It is not recommended for metal or low tunings.

The EVM12L was introduced in the ’70s, and is the heavyweight of the guitar world. Although there were different versions over the years, they all share a specific sound character that distinguishes them from typical guitar speakers. Electro Voice is mainly known for their P.A. products, and the EVM12L carried this approach over to guitarists. This real heavy 12″ found home in many combo amps of the ’80s, as well as in so-called Thiele cabinets. The massive ceramic magnet alone weighs 7.3 kg.

The standard version handles 200 watts while the Zakk Wylde Signature model, which he uses in 4×12 cabinets, ups this value to 300 watts (1200-watt peak) — per speaker! With a sensitivity of 100 dB, this speaker is loud and can handle lots of input.
The frequency range goes a little higher than a typical speaker, making the EVM12L more open, but also harsh if your amp happens to sound like that. Overall, this speaker is pretty neutral, offers a tight bass reproduction, plays really loud and punchy, and is very robust. It has less coloration than most speakers and doesn’t sound “vintage”. Its sound is very direct, which may or may not be to your taste.
It can sound great with clean sounds, and also works well with distorted sounds and really deep tunings. It might not be to everyone’s taste, but it’s undoubtedly a classic. So, while some might consider this speaker to be in a class of its own, others might find it over-the-top or too neutral.

Goodmans Audiom 61
A gem of the ’60s, this English 12”-driver has a power-rating of just 20 watts (RMS). The speaker was originally designed for hi-fi and, even more so, for public address systems. It uses a Feroba II magnet, and has an exceptional low resonance frequency of 50 Hz (there was even a bass version with 35 Hz). It provides a colored, vintage flavor which is brighter and more mid-scooped than a G12M. It was found in certain cabinets made by Laney in the ’70s — think early Black Sabbath.
Oxford 12L6
Oxford speakers can be found in old Fender amps. This 12” driver, with a power rating of 30 watts (peak), was made in the early ’60s and is a clear vintage design using alnico magnet. It was used as an alternative to Jensen speakers and can be found in Fender models such as the Deluxe and Tremolux, as well as in models using multiple speakers such as the Super Reverb or Vibrolux Reverb. They work fine for authentic Fender clean tones, but are also a matter of taste when compared to Jensen and JBL models.
MFD Eminence Legend 125 50W
Eminence is one of the biggest suppliers for guitar speakers, with a wide range of models. The Legend 125 has a power rating of 50 watts (newer models offer 75 watts). The powerful 12” driver uses a ceramic magnet and has a sensitivity of over 100 dB. However, it is definitely designed to create a vintage tone with warm low end, pronounced upper midrange and a real open top end. A great choice for vintage rock ‘n roll and blues, including country and rock.
JBL D120F
In the ’60s, some guitarists were looking for louder performances to cover the big stages they performed. To do so, amp manufacturers turned their attention to the world of hi-fi. It was Fender who licensed JBL’s D120 (the Fender OEM version adds the F to make the name “D120F”), and placed it into their Showman amps to give Surf-guitar hero Dick Dales the levels he needed. This 12″ driver uses a massive alnico magnet, and a robust design with a large voice-coil to handle high power input. Later on, they were also used in Twin Reverbs. Sound-wise, the D120F has a well-defined bass, barking mid-frequencies that still retain some roundness, and a good amount of treble which can be perceived as too much when used with distortion. It’s a great choice for an American clean sound. Unfortunately, these classics are slowly getting difficult to come by, as original re-coning is no longer available. Fortunately, digital emulation can preserve this sound.
JBL 2110 8″
Most speakers for guitar applications have a diameter of 12″, while 10″ and 15″ drivers are more rare. But let’s not forget the specific sound of speakers found in smaller designs, such as the Fender Champ. In this case, Fender opted for an 8″ full-range speaker provided by JBL.  If you can live with the fact that going smaller means having less bass, you’ll find this alnico-driven speaker has a surprisingly good sound with a pretty clean character.
Please follow and like us: